#BB10: The reason why Bigg Boss yells at Swami Om! 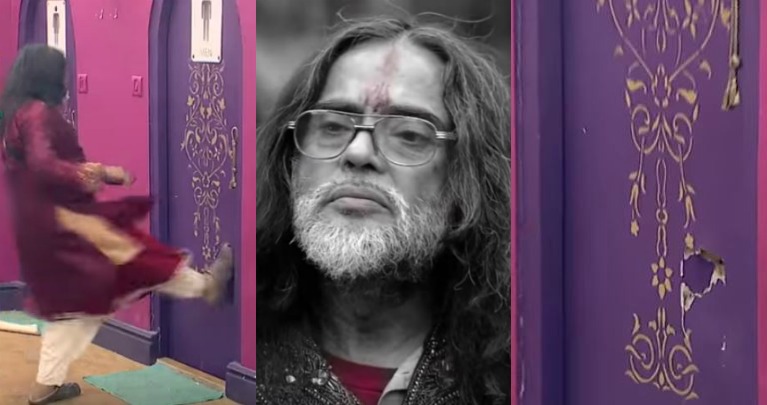 #BB10: The reason why Bigg Boss yells at Swami Om!

The precap saw Bigg Boss give a nice dose and a disciplinary lecture to the self confessed God Man.

Tonight’s episode of Bigg Boss will be very interesting from what we saw in the precap yesterday. Bigg Boss introduces the captaincy task where the contestants will be divided into pairs.

The captaincy task was a Girls v/s Boys’ task but with a twist. The girls and the boys will have to discreetly exchange love letters with their respective partners without getting caught. The partners assigned are Manveer-Nitibha, Manu-Mona, Gaurav-Bani and Rohan-Lopa. Swami Om and Priyanka are appointed as the wardens of the boys team and the girls team respectively and their job is to not let both the teams communicate in any manner.

And as expected, the task will see loads of violence with Priyanka and Swami Om at the helm of things, considering the fact that both the contestants are known for their violent behavior. The precap gave us a fair idea of what all will transpire tonight. But the highlight sure will be Swami Om, who would get so engrossed in the task that he would destroy the Bigg Boss property.

As the warden, Swami Om snatches Rohan’s letters to Lopa, but Rohan snatches them back and runs into the bathroom and locks himself in. Swami Om then starts kicking the door and even breaks it and we all saw this in the promo.
But this is what actually transpires during the task. Swami Om, in the past has attacked Rohan and his family but Rohan has always maintained his decency and respected the non-violence’ norm of the Bigg Boss house.

This time too, Swami Om says some nasty things to Rohan. He threatens Rohan to open the bathroom door or else he would beat Rohan and ruin his face making sure that Rohan will never get any work in the future. His behavior shocks the other inmates and they even try to calm him down.

But by then, Bigg Boss stops the task and reprimands Swami Om for his comments. Swami Om is given a final warning that if he repeats his mistake, he will be thrown out.

Once again, the whole house will have to bear the brunt of Swami Om’s antiques.