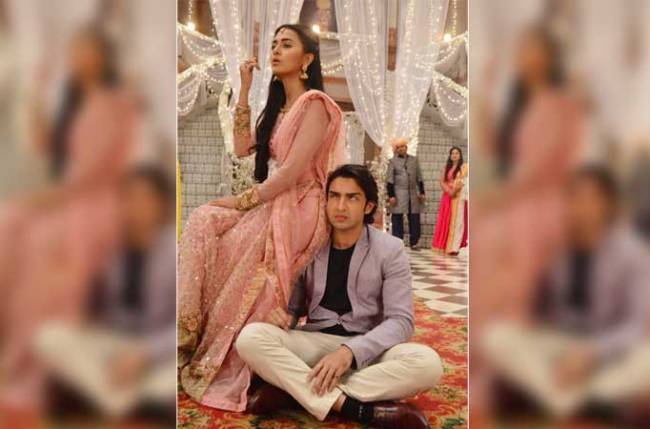 Mumbai, January 22, 2018:The shoot for the upcoming wedding track in Rishta Likhenge Hum Naya has been in full swing. The actors are having a blast and equally sweating it out to match their steps for the dance sequence. In fact, during one such shoot, Diya (Tejaswwi Prakash) and Ratan (Rohit Suchanti) were caught in a hilarious moment.

The duo after an elaborate dance practice session decided to take a break. Since there were no chairs in the vicinity, the spot boy ran to arrange chairs. At that moment, Tejasswi who was restless found solace in Rohit’s shoulders who was already sitting on the floor. She at once climbed up on his shoulders and found a comfortable seat for herself! Seeing her the entire crew burst out laughing and captured the moment in a camera. As for Rohit, he was totally amused by the entire situation and let the lady have her moment of rest after a tiring day like a true gentleman.

Says Rohit, “We had been practising the dance session since morning and towards the end of the day, we both were drained and tired. Since I could not find a chair around, I retired on the floor to get some rest. Tejasswi in the meantime was looking for a chair too. But suddenly she just turned to me and decided to sit on my shoulders! Initially, I was totally taken aback but when I saw the crew clicking pictures, I played along. It was indeed quite funny! We kept teasing Tejasswi for the rest of the evening, with everyone offering their shoulders to her to sit.”

In the upcoming track, Ratan has taken the moral responsibility of getting Diya and Abhay married. To ensure that everything happens as planned, Ratan will also keep a fast. Will this wedding happen without any hindrances? Or will fate play a different move?