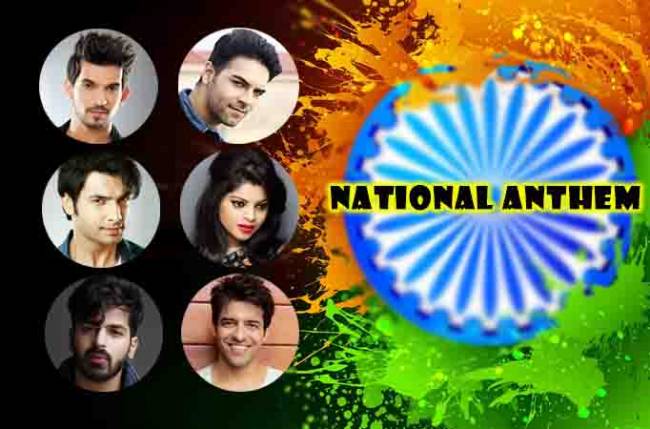 Ankush Bali: I don’t think the National Anthem should not be played in halls. There is no point to show or prove patriotism just before watching a movie.

Sehban Azim: There’s nothing wrong in making the national anthem compulsory in theaters, right before a movie. It’s just a two-minute thing and I guess we all as Indian citizens should have no problem standing up for it. It would make a difference because in our school days, we all have stood up every day for it and it reminds us of our country. It surely induces love and praise towards our motherland. Now we hardly get to hear it or sing it. As almost everyone goes to the theatre, so it seems the legit place to make it happen, to invoke that same emotion which we experienced when we were growing up.

Himmanshoo Malhotra: I think it should be played since it keeps you in touch with the beautiful lyrics of the anthem and their in-depth meaning. As life is running at such a faster pace, standing up for the anthem and taking a respite for two minutes is actually necessary. Also, we must take care of the fact that all these things should be done not imposingly but voluntarily.

Sanjay Gagnani: I’m patriotic and so I wouldn’t mind dedicating two minutes of my time in singing the national anthem before watching a film. But whether it should be played or not in cinema halls, I wouldn’t like to comment on that instead, I would leave that to our constitution and Supreme Court to decide because I have full faith in the decisions of the constitution and the Supreme Court of my country.

Sneha Wagh: Nationality should be in heart more than in cinema halls. I don’t understand what good it will do to play the national anthem before a film, if people don’t know how to respect it.

Gurpreet Singh: Yes, I agree that the national anthem should be played in cinema halls. I don’t know why people can’t stand for even 52 seconds; it’s our motherland after all. We have the time to watch the movie for three hours, but we don’t have the time to stand for the national anthem. It is our duty to show respect to our national anthem. Our Indian army fights every day and night and stands for us. Our freedom fighters have struggled a lot to get us independence, then why can’t people respect that? Whenever there is a terrorist attack, so many people say we are with our army. All their patriotism comes out at that time. We should stand and show respect to our national anthem.

Gavie Chahal: Our national anthem is our pride. Standing in respect of it is equal to respecting and touching the feet of your parents and take their blessings every morning. Do you know that in countries like Australia, every day at 6 pm at all community centers, pubs or wherever, they play a one-minute anthem in respect of their soldiers and martyr! And here people find it difficult to stand before a film.

Sshrey Pareek: To be very honest, it’s a good gesture to remind us in theatres at least. I don’t think any countryman sing or remember national anthem in daily life. I get goosebumps every time I listen to it in theatres and I have not seen in so many years that anyone is not standing and disrespecting it.

Ssharad Malhotraa: People go to the cinema halls to watch a film. They go there for entertainment. At that time many of them are not serious and don’t sing the national anthem seriously. We often see people moving or even laughing when the national anthem is going on. This is why I feel that it should not be played in theaters.

Arjun Bijlani: Our country has given us so much and we should be grateful. The national anthem should invoke a sense of pride in us. If this happens, then it won’t matter where we are signing it. I am okay with the idea of national anthem being played in cinema halls.