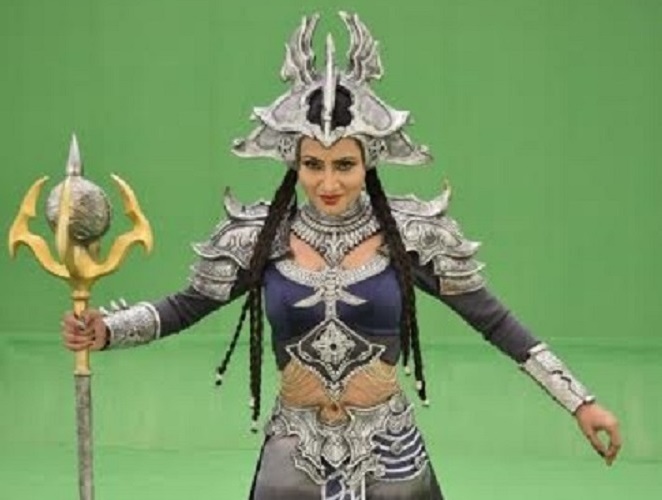 Nigaar Z. Khan all set to play a super-witch soon.

Nigaar Z. Khan is all set to play yet again a negative role in her next! She is too excited for her comeback and feels it is the right time to be focused again on the work. She will be portraying Prachandika on SAB TV’s fantasy show Baal Veer. Nigaar got candid about her role and show. So let’s directly look on what she has to say about her new venture…

You took a short break after marriage. What prompted you to take up Baalveer?
To be honest it’s purely the passion of acting and every actress takes a break after marriage because I believe your marriage deserves that amount of attention and my husband definitely deserves a lot of attention. So I’m very glad to have taken that break because also as an actor it helps you rest as well as rejuvenate and to come back and understand that you really have the passion towards acting. So, Baalveer, fortunately, came at the right time although I’ve been getting quite a few offers to play negative roles in a few daily soaps and as I live in Abu Dhabi now and I can’t commit to a 26 day contract, SAB TV, and the production house helped me get a contract where they finish shooting my bit in 10 days a month, so that gives me the best of both the worlds.
Elaborate more about your character on the show.

The character is called Prachandika and this character really works as it looks different from all the negative roles that have been portrayed on the show before. This character is very cool, calm, she is not that typical bad woman who will show anger and fear and all, she is very stylish, she is made out of mercury. She is very calm but at the same time very vicious and she is there to create problems in Baal veer life.

It is believed that the look of your character is quite elaborate. Tell us more about it?
My look is very elaborate, it took the team almost 2 months to decide the look for Prachandika. I will be seen wearing a purple lipstick for the first time in my life, I wasn’t sure if I would be able to carry it off but then I realized I can carry it off pretty well.

Since you are doing a show on SAB TV. Are you open to attempting comedy if something comes your way?
Well, I have done a lot of comedy in the past, I’ve in fact even won a comedy reality show a few years back too. It gives me a breather, but fiction I don’t really know, I can’t do slapstick comedy, I don’t like it. As an actor, I don’t mind doing cameos and take a breather and enjoy it so yes if comedy comes my way why not. I’ll be more than happy to do it and yes I’ve done Yes Boss one of SAB TV’s most watched and popular shows and it was, of course, my first ever comedy show where I had a running role.

Since you are settled in Dubai. How will you be managing shoots and juggling between both the cities?
I love juggling between things and places it’s exciting , I truly miss Mumbai and I’m known to juggle around whether it was India and doing 3 shows at one time or whether it’s my personal life. Given a choice, I would love to continue juggling between all the tasks in my life because I just love it and it keeps me going.
Any plans for the big screen?

No, not really I’ve never had plans for the big screen it’s been almost 15years in this industry and a lot of offers have come my way, but yes if given a choice a character comes my way which values me as an actor and not just a sexy figure in short clothes as I’m totally against that, so yes if anything of that sort comes my way nothing like it.
We wish the actress, good luck!