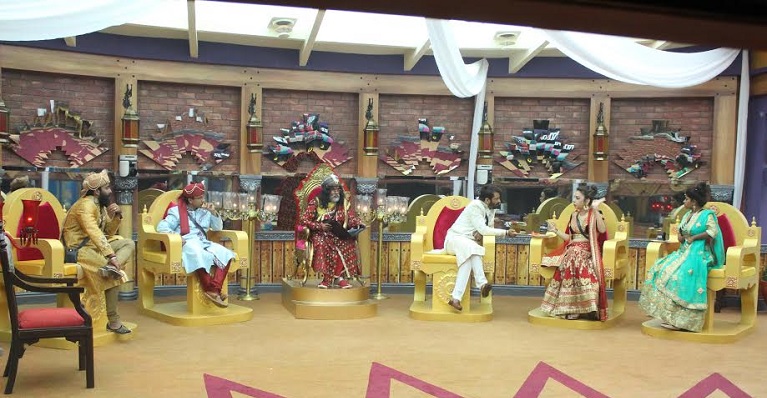 As a fresh day dawned to ‘Pak Chik Pak Raja Babu’, it brought with it the anticipation of the looming luxury budget task. And whilst waiting for it to be announced, Swami ji plots with Manu, Manveer and Navin about how to tackle the task this week, and maintaining a united front. Meanwhile, on the celebrity side, Karan turns peacemaker between Lopamudra and Bani and tries to ease the tension created due to the nomination process.

As the drama intensifies, Bigg Boss introduces the luxury budget task – a costume drama titled ‘Raja aur Rank’. In keeping with the flavour of the task, the Indiawale and celebrities transform themselves into various characters belonging to a royal family. While the Indiawale get regal status and get to emulate members of a royal family, the celebrities are their obedient staff and subjects throughout the duration of the task. In order to help them get into the skin of their respective characters, Bigg Boss supplies the housemates with special costumes which they must wear for the task. But, in a twist of fate, the celebrities get an opportunity to turn tables on the Indiawale through a secret task where they have to capture the Indiawale in 12 moments orchestrated by the celebrities.

As the task begins, the Indiawale face a tough time in taking advantage of the celebrities, especially with Om Swami and Nitibha’s constant bickering over the rules of the game. Even Manveer gets tired of Nitibha’s endless taunting and ends up getting into a screaming match with her. Even Navin finds himself at the receiving end of Nitibha’s temper and finds himself side-lined in the process. Swami ji ends up taking his role of a king too seriously, thereby annoying even his fellow royal family members. Scared of losing the task, Manu takes charge and attempts to bring some method to the madness. Manu’s day gets better thereafter, when his closest celebrity friend Mona Lisa surprises him with a kiss on his cheek.

While Gaurav slowly and steadily pushes the celebrities to complete the secret task, Manu and Manveer find him too pushy and try to get him put in jail under false accusations. But Gaurav smoothly escapes punishment. Rahul, on the other hand, is not as lucky when his actions around King Swami land him in jail. When Bigg Boss supplies the celebrities with paints and massage oil to fuel the luxury budget task, Rohan finds himself banished to jail for misbehaving with Nitibha while painting Swamiji’s picture. And, as Lopamudra approaches Manveer with the massage oil, her intentions are misunderstood resulting in a battle of words between the two.

The luxury budget task has brought new hostilities inside the Bigg Boss house. Will the celebrities be able to turn tables on the Indiawale or will they fail at their secret task?