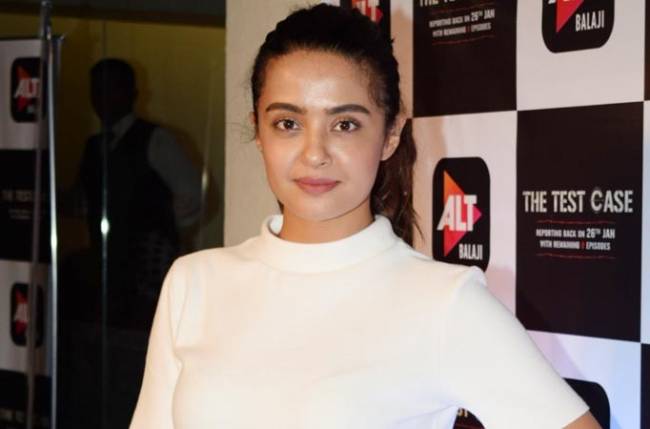 Mumbai, 31 January 2018: TV turned Bollywood actress Surveen Chawla, made her digital debut with ALT Balaji’s upcoming series Haq Se, a drama set against the backdrop of Kashmir with an ensemble cast including Rajeev Khandelwal. The series was released amidst the controversial Padmaavat’s release.

During a special screening of the original, Surveen didn’t hesitate to speak about the infamous row.

In an interaction with the media, Surveen said, “There’s liberty on the digital platform, We’ve recently seen and heard about a film that made us realise that if one doesn’t have the freedom of expression and liberty, then what all they can go through. I feel it’s unfair.”

She also made strong points from the perspective of an actor. She said, “As an actor, as a maker and as a visionary you need to have that liberty. Our social scenario is highly influenced by our political scenario. We have corrupted our rituals and customs with our misinterpretation. It is a boon that you have freedom on the digital platform.”

According to the Hate Story fame Surveen, an actor’s job is to follow their script and the director.

Talking about Swara Bhaskar’s open letter, Surveen explained that it was Swara’s opinion and perspective about a certain topic and people should respect someone’s point of view. Talking about Swara, whom he also knows personally, Surveen said, “I haven’t watched the film so I can’t really comment anything. I’m sure she has her own perspective and opinion. I’ve read her open letter but I’m not the right person nor in the right position to comment.” She further added, “I respect everyone’s views and if she has shared her opinion she must have felt like doing so. If she has very politely spoken or revealed about her feelings, we need to respect her and Sanjay Leela Bhansali. I’m nobody to say anything. “

Well, Surveen has a point to be noted. What do you guys think about her opinion? Share your thoughts in the comment section below.