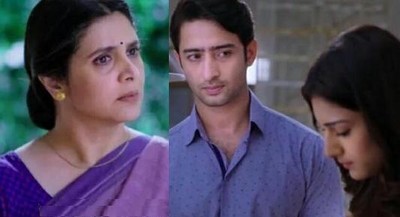 How will Ishwari react on Dev and Sonakshi’s relationship?

Earlier, we saw how Sonakshi’s anklet goes missing, and Dev asks her to meet him in his room if she wants it back.

Now, when Sonakshi will meet Dev, Ishwari (Supriya Pilgaonkar) catches them when she is in search of Dev, and is shocked to find Sonakshi there. Irked watching them together, Ishwari will question Sonakshi as to what is she doing in Dev’s room and a tense Sonakshi will end up giving a silly excuse.

A source informs, “Sonakshi will excuse herself saying that Dev had forgotten his phone in the house, and hence she had come to return it. Ishwari is well aware that she is giving an excuse and in order to grill her, she will ask her intense questions in suspicion like where is the phone if she came to hand it over to Dev? A tensed Sonakshi will escape the tight situation by saying that she is thirsty. ”

Wait up to know how will Ishwari react on knowing that Dev and Sonakshi are in a relationship?