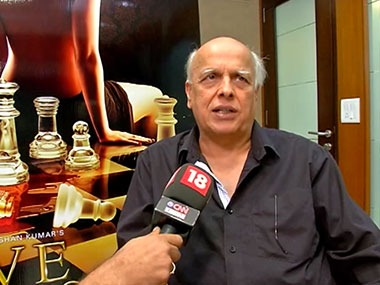 Two years ago, filmmaker Mahesh Bhatt received death threats from a group of 13 people, for him and his family, but the accused were eventually arrested in November 2014.

Now, India Todayreports that Bhatt received similar death threats last week, from an unidentified caller who vowed to shoot him, his daughter Alia Bhatt and wife Soni Razdan in the event of Mahesh’s failure to deposit Rs 50 lakh in a Lucknow bank. Initially, Mahesh dismissed it as a prank call. But when the caller sent him text and WhatsApp messages daring him to not take the issue seriously, Mahesh decided to take action.

The same report suggests that he filed an FIR at the Juhu police station. The matter was then shifted to the Anti Extortion Cell of Mumbai Police. The security at Mahesh’s Juhu residence was also beefed up.

The Hindi film industry has often been at the receiving end of such extortion calls, particularly from the underworld. Last month, a few members of the underworld threatened to kill the makers of the comedy Coffee with Dif they went ahead with the release of their film that allegedly portrayed the don, Dawood Ibrahim, in a comical or objectionable light.

The makers were forced to censor the ‘objectionable’ parts to ensure a smooth release of the film. However, its narrative got heavily tempered because of the last-minute censorship. Thus, the film seemed incoherent and eventually bombed at the box office.