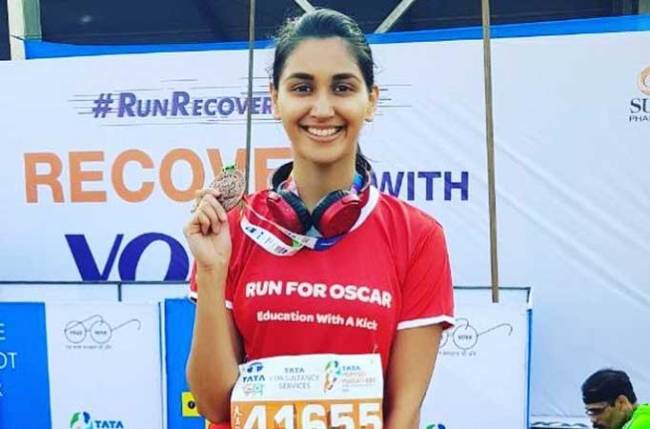 Mumbai, January 22, 2018: The stunning Haasil lead, Nikita Dutta is a fitness fanatic in true sense. The actress has been the talk of the town for her stupendous acting in Sony TV’s Haasil opposite Zayed Khan and Vatsal Seth. The actress will be seen acting in Akshay Kumar’s upcoming movie Gold that will be releasing in 2018.

The admirable beauty, who is most times caught up in the hectic work schedule, loves running and maintaining a fit body. “I am completely against the concept of diet and skipping meals to stay fit,” says Nikita Dutta.

The beauteous actress who has been an active runner in the Tata Mumbai Marathon has been participating in the marathon since the last 3 years. The actress has improved and broken her own set time record. Despite being caught up in heavy work schedules and hectic night shoots, the actress has managed to cover her 21 km mark in the marathon as well as made it a point to hit the gym at least a week prior to the marathon.

When asked about her experience on being a part of the marathon, she shares, “The entire feeling of completing the run is simply out of the world. The feeling has just gotten better and better in these passing years.”

The actress further adds, “There is no better way to test your fitness and stamina than running a marathon.” Running a marathon and completing it shows how strong are you and tests your strength.”

In a rendezvous with business cash, the fitness enthusiast shared a quick tip to run a marathon saying, “When running a marathon never compromise on your diet as a well balanced diet is what keeps you going.”

This television diva has made a significant progress in her own set time record in the last 3 years: 2 hours 40 mins, 2 hours 30 mins and 2 hours 28 mins consecutively.

Way to go Nikita Dutta! It’s remarkable how you are balancing work and fitness enthusiastically.